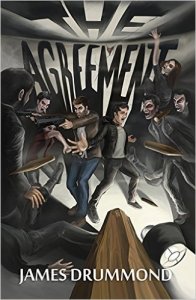 “Opening his mouth wide, he plunged his fangs into Ian’s neck and took several deep gulps of the man’s velvety warm blood.”

Thus begins this latest spine-tingling installment of author James Drummond’s outstanding Shadow Tales Series. It’s the best book yet, highlighting the horror hunters’ exploits as they attempt to tame a vampiric Valhalla they’ve discovered, and release the village’s human occupants from a ghastly arrangement they’ve made with the Undead.

Leading the fight once again is Toby Hoffman, the teen hunter who battled werewolves and warlocks in the first two books. Joining him are experienced hunter Jack Steele, and the two newest members of the team, Rachel Chochopi, a Native American mystic, and Natalie Sherwood, a young witch just now learning to control her prodigious powers.

The action begins with Toby — who has inherited several nifty new telekinetic and pyro kinetic abilities from a warlock upon the creature’s death — and Jack embarking on a search for a missing hunter — Jack’s lover and closest friend, Angelina Jane. The trail takes them to Loubcroy, Scotland, where there exists a hideous arrangement between interloping vampires and the town’s human residents.

The Chief of the vampire population is coolly urbane — yet utterly ruthless — Alister McKean. He rules the village with quiet surety, ready to settle down after more than three hundred years of living on the run. In fact, he’s the main reason Jack and fellow hunter Angelina had been scouring the Scottish countryside for nearly two years, seeking to extract revenge for Alister’s brutal bloodletting and murder of Jack’s parents long ago.

With a village in need of liberation, the hunters settle into their task with grim resolve. Does Jack find Angelina and set her free? Can Toby and Rachel pursue their budding romance in the midst of near-constant physical harm? And, will Natalie ultimately gain control of her wildly erratic supernatural abilities and use them for the common good?

The teenage witch has recently discovered that her emotions can impact her increasingly powerful — and destructive — new powers. When she loses control of one, she loses control of the other. This leads to some serious self-doubt. In fact, all the teens struggle with issues such as self-doubt, hero complexes and even guilt as the book progresses. It’s all part and parcel of the complex layering of characters’ emotions that sets this well-written piece of fiction above others in the horror genre.

Five-plus stars to The Agreement. It’s much more than a terrific tale of terror and vampire violence. You’ll race to the surprising ending, encountering treachery, triumphs and tragedy along the way. But, through it all, it will be the unceasing ability of the four hunters to rely on each other for their very lives that you’ll remember most.

Keep scrolling for more examples or return to Home Page

Spread the love
Toggle the Widgetbar